Traveling by car in France: traffic rules and tolls

Every year millions of tourists use the French autoroutes to reach their holiday destination. The motorways in France are in perfect condition and except for the Paris and Lyon bypasses, traffic jams are usually not too bad. Avoid the black Saturdays, when all of France is on the move. in 2020 that will be 1, 8 and 15 August. You have to pay toll on most motorways, and for a ride from the North to the South of France, that will be a considerable amount, especially if you are traveling with a caravan.

Toll roads and tolls in France

There are several toll companies in France (Vinci, Sanef, ASF), each of which manages a part of the motorway network. You will find the toll fare for the French autoroutes on the central website. There is also a convenient chart with French toll rates (pdf). You can also calculate the costs of the toll roads in advance with an online route planner. In addition to the fastest or shortest travel route, Viamichelin shows the toll amount to be paid (without or with a caravan) and the exact locations where the toll must be paid. This Michelin route planner also shows road works for France. On most autoroutes the toll rate is around € 7 per 100 km. Toll fares for some well-known French holiday routes as of February 2020 for a passenger car (the rate with caravan in brackets):

Paying toll in France is quick and easy with a credit card; you choose the lane with the sign CB (Cartes Bancaires). The toll gates with the CB symbol have payment machines and you can only pass here if the height of the car and any trailer is less than 2 meters (class 1). With a caravan you can’t pass through these ports because the machine cannot calculate the higher rate. First you put the toll ticket in the slot and then the credit card, which reappears almost immediately. You can drive straight on, or press the button for a receipt. The lines at these automatic gates are almost always much shorter than at the manned gates.

Note: paying with a debit card (bank card with only the Maestro logo) is not possible at most toll stations in France, only with a credit card (Visa Card or Mastercard) or cash!

If you use the French toll roads regurarly, then the purchase of a toll badge can be interesting. You stick it behind the windshield and then you can pass most toll stations at a footpace via the leftmost toll booth (orange t) or at 30 km / h (orange t and sign 30). This saves time and hassle with credit cards and toll tickets. You will receive a monthly invoice at home and the toll amount is automatically deducted from your credit card account. The costs are € 1.70 for each month that you use the badge. The toll badge is available at automobile clubs or online at the French toll company APPR (French). Beware: there are also websites (such as tolltickets.com) that offer toll badges for much higher prices!

In 2020, Saturdays 1, 8 and 15 August will be considered as “black Saturday” on the French motorways, because many French families (and foreigners) will then go on holiday and the traffic jams, especially on the autoroutes to the south, will be horrendous. Saturday, August 22 will be extremely busy in the south because of returning holidaymakers. For winter sports enthusiasts, it will be very busy on Saturdays 22 and 29 February 2020 on the roads to the winter sports areas. Bison Futé gives a pdf overview of the busiest travel days in France in 2020 and also gives current traffic jams on the autoroutes.

If you have to pass Paris from the north in the direction of Bordeaux and Orléans, you have the choice to follow the always overloaded Boulevard Périphérique or the A3 and A86, a slightly longer route with a high chance of traffic jams. For most motorists, the second option is the easiest -- merging traffic and reckless motorcyclists on the Boulevard Périphérique make driving on this route no fun. Attention: the signs “Bvd Périphérique exterieur” refer to the western outer ringroad, counterclockwise, and the signs “Bvd. Périphérique interieur” refer to the eastern inner ring, which runs clockwise from the north to the east. The maximum speed on the Bvd. Périphérique is 70 km, and frequently 50 at road works or because of smog. There are speed cameras! 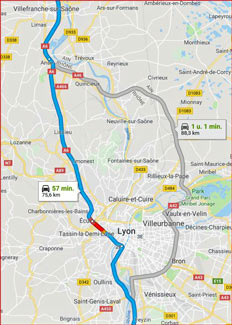 Driving on the A6 from Luxembourg / Dijon or Paris in the direction of the Mediterranean, you have to make the choice to follow the A6 / A7 through the city of Lyon with the infamous tunnel the Fourvière or to take a 18 km longer route via the A46, which is signalled on the traffic signs as the route to Marseille. In general it is advisable to choose the A46 at peak times, although it is quite possible that you will also get stuck on the A46 in a traffic jam. By the way, there are plans to free Lyon of through traffic, so the problem will eventually resolve itself.

Like elsewhere, in France the number of speed cameras is growing rapidly. Previously they were indicated at a few hundred meters distance by signs with the text Pour votre Sécurité, contrôles automatiques, but these signs have now been lreplaced by signs with the text Pour votre sécurité contrôles radars fréquents, with the speed camera in a zone up to a few kilometers after the sign. Navigation equipment that alert drivers to speed cameras is prohibited in France. If you enter a route in the Viamichelin route planner, you will see in which zones you can expect speed cameras. The zones are 4 km long for motorways, 2 km for other roads outside built-up areas and 500 m within built-up areas. 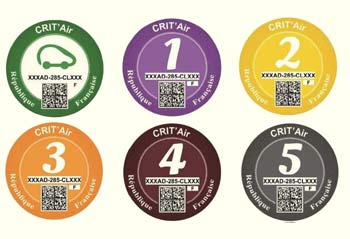