The French Provence, from the Pont du Gard to Menton 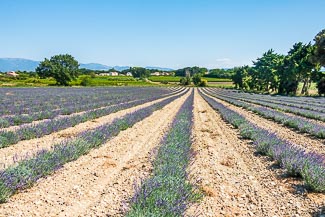 The Provence is one of the most popular tourist destinations in France. This region boasts a mild and sunny climate (along the coast even in winter), numerous famous sights, mountains, hills and gorges, and an abundance of natural and urban beauty. In high season it can be unpleasantly crowded, but even then it takes little effort to take a walk away from the hustle and bustle or take a bike ride on quiet roads (see Cycling in Provence) 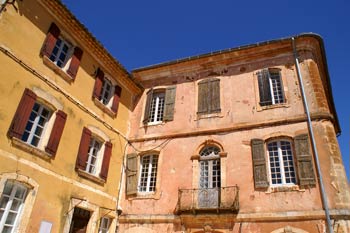 From Avignon in the Rhone valley, the Mont Ventoux can be seen in the distance on clear days - no rarity at all. Even in the middle of summer the mountain seems to be covered with snow because of the white limestone slopes. In the fourteenth century Avignon was the residence of the Pope for a while, after Clemens V was elected Pope by the cardinals, but refused to move to Rome. The papal palace in the centre of the city is a popular and impressive attraction due to its size, but very little remains from the period when the Popes were actually in power here. A stroll through the city along the famous Pont d'Avignon and a visit to the picturesque rue des Teintures, where the dyers used to practise their craft, is certainly an equally interesting way to spend your time. 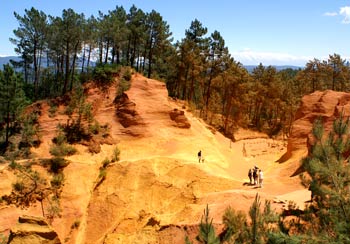 To the  east of Avignon you can visit a few typical Provençal villages – regrettably they are firmly in the grip of mass tourism. On weekdays outside the high season they are still worth a visit. Gordes is very picturesque situated on a hill and is famous for its houses in the typical Provencal pastel colours, especially ochre. This colour is also prevalent in Roussillon, where there is a former ochre quarry. A walk through this sandy area with its bizarrely coloured rocks is definitely worthwhile. When the mistral blows, the swirling fine dust forms an extra attraction. 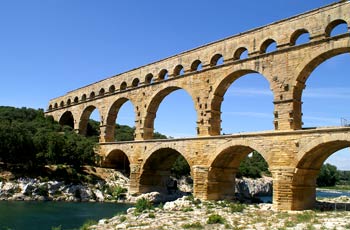 The Pont du Gard is officially not in Provence, but this Roman aqueduct over the river Gardon, 20 km west of Avignon, is not to be missed on a tour of northern Provence. Listed as a UNESCO World Heritage Site, the bridge is the busiest attraction in the whole of France with more than a million visitors a year and was once part of a 50 km aqueduct to supply water to the Roman city of Nemausus (Nîmes). If you look closely, you can see that the 49 m high bridge runs slightly round, so that it is more resistant to the pressure of the water. Another proof of the mastery of the Roman master builders, who possessed only simple measuring instruments: the total drop of the 50 km long aqueduct is only 17 m, or 34 cm per kilometre. 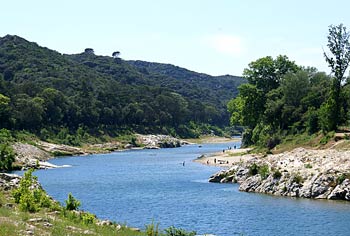 Apart from the bridge, the museum is also well worth a visit. Among other things, you'll find lifelike tableaux about the way the bridge was built. Admission to the bridge and museum costs € 9.50 pp. (children up to 18 years free of charge), including parking.
Attention:If you just want to see the bridge and come by foot or bike, you don't have to buy a ticket. Then walk or cycle around the parking lot on the right (there is no check). If you are travelling by car and only want to see the bridge, buy one ticket to leave the parking lot. This saves money! There is absolutely no free parking space for the car in the surrounding area. Camping La Sousta is within walking distance of the bridge, only camping guests can park there (this will be checked).
Along the Gardon are some beautiful small beaches, making it possible to cool off in the river on hot summer days. Canoeing is also popular here, and rightly so, as it is a special experience to peddle between the arches of the Pont du Gard. 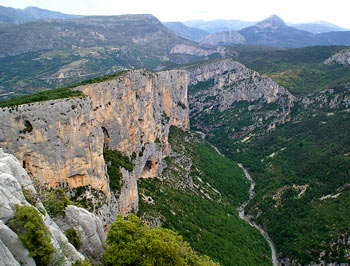 About 50 km east of the Lubéron lies the Grand Canyon du Verdon, one of the most spectacular and deepest gorges in Europe. For hikers the Sentier Martel between Point Sublime and Chalet de la Maline is a must. The route descends into the gorge (about 500 m lower) and follows the river. Halfway a difficult passage has to be passed through 240 steps. The whole hike takes at least 6 hours. Put on sturdy shoes and bring plenty of drinking water and a flashlight (tunnels!). In summer and weekends it is very busy in the gorge, large groups will hinder you to keep up a good pace on the narrow path.
Tip: Almost everyone walks from Chalet de la Maline to Point Sublime, but walking the other way around has major advantages: those who leave Point Sublime no later than around 1 pm will only be confronted with oncoming hikers on the first half of the walk. The last few hours you will walk in complete peace and quiet. Finding a lift or a taxi back to the starting point is normally not a problem. 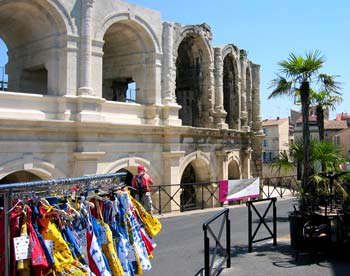 The atmospheric city of Arles certainly deserves a visit, especially because of its Roman amphitheatre, an impressive reminder of the city's illustrious past. The city is of course also known as the home of Vincent van Gogh from February 1888, but unfortunately the houses where he lived were destroyed during the Second World War. Here he painted some of his most famous paintings, but to see them you'll have to visit museums in Paris or Amsterdam.

Just below Arles lies the Camargue, a vast flat area that lends itself perfectly to exploring by bike. The roads are partly car-free, but often unpaved, so your speed will be relatively low. It can also be very windy. This marshy Rhone delta has a rich bird life, especially the flamingos stand out. If you cycle along the Etang du Fangassier and the Etang de Galabert, you  will certainly encounter these striking pink birds. As well known as the flamingos are the semi-wild white horses and the herds of bulls. With a little luck they can be observed from the road. 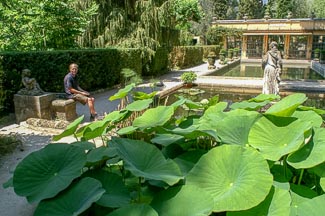 Not far from the Italian border is the seaside resort of Menton, a subtropical corner of southern France. Due to its sheltered location, tropical plant species that do not survive the winter elsewhere on the south coast of France flourish here, like banana, Canary palms and Bougainvillea. The city is famous for its subtropical gardens. One of the most beautiful is Serre de la Madone in the Gorbio valley a few kilometers outside the city. Anyone interested in exotic gardens should definitely take a look at this Victorian-style villa from the 1930s and its romantic garden with gazebos, classic statues and fountains (addendum 2020: Regrettably, this garden seems to be rather unkept nowadays. Please inform at the Menton tourist office about visiting this garden). 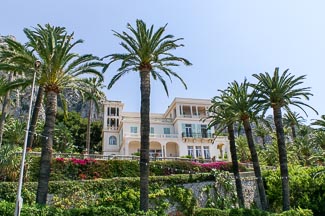 At the end of the 19th century, Menton was one of the first places where Northern Europeans fled the cold winter, and the city has managed to retain some of its calm, sedate atmosphere. The view of the red and ochre-coloured houses of the old town from the road that leads to the Italian border is magnificent.

Hotels in Provence, one of the most touristic regions in the world, are of course available in all price ranges. Given the crowds here from April to October, reservations are recommended 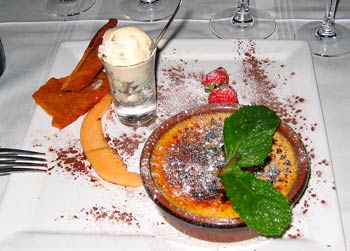 Large supermarkets can be found in every provincial town and are indicated with large signs. Look out for names like Auchan, LeClerc and Champion. Eating out is still a bit cheaper than in the more northern countries (the local wine in carafe is good and not expensive) and with some luck the price-quality ratio can even be excellent.