Cycling in hilly Tuscany between cypresses and olive trees 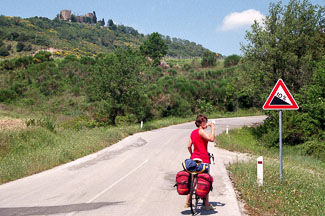 Tuscany with its classic scenery is a beautiful region to explore by bicycle. The landscape is filled with centuries-old olive- and vineyards, fields and woods combined with scenic villages and towns that harbor many cultural treasures. The roads are good but there are rather steep hills to conquer, since many of these beautiful villages are located on hill tops. In short: Tuscany can be very enjoyable, but you will have to put some effort into it.

The best months for a bicycle trip in Tuscany are May, June and September. The summer months are also good but these months are often very, very busy. After all, Tuscany is one of the most popular holiday destinations in Europe. Temperatures above 35 degrees Celsius are not an exception in these summer months. It is advisable to leave early to avoid the heat and enjoy a lengthy siesta in the afternoon. Keep in mind that when visiting in May or June you might still encounter rainy weather. 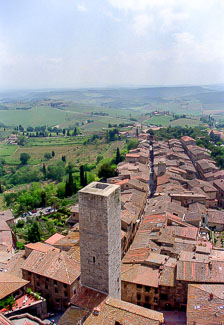 Campsite Boschetto Di Piemma near San Gimignano is an excellent starting point for a round trip throughout Tuscany. The campsite is a thirty minute walk or a ten minute bike ride away from the marvelous town of San Gimignano, famous for its “Manhattan” towers. During the day the town is flooded with busloads of tourists, but at night the peace returns and you can stroll through the lovely medieval streets or have a drink in one of the cafes on the beautiful central plaza. And of course a visit to one of the ice cream parlors should be on anybody's itinerary. 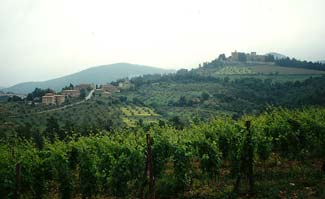 Our first leg to Volterra is only 30 km but has some steep hills, which makes it very suitable as a warm-up for the muscles. The traffic is relatively calm which gives us the opportunity to fully enjoy the typical Tuscan landscape. When we reach Volterra the landscape changes. The volcanic hills are barren and grey and very different from the lush green landscape experienced previously. When in Volterra do not forget to pay a visit to the interesting Museo Guarnacci, dedicated to the Etruscan history of the town. 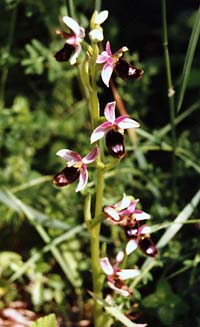 Via Massa Marittima we reach the coast. The high season hasn’t started yet in May and many of the campsites are still closed. But party campsite Pappasole is open and has a free spot left near the stage that is used for entertainment. We figure it’s alright for just one night. The next day we travel to Monti Dell’Uccelina in the Maremma along a coastal road, fringed by pine woods. Monti D’Uccelina is a lovely area with green hills, abandoned beaches and marshes. You can enjoy wonderful walks in this area, that is used as resting place for birds trekking between Europe and Africa. An encounter with porcupines is a real possibility here; at least you will find their sharp spines on the ground. To reach the park, we have to cross the River Ombrone. Luckily there is a rowing boat ferry service in Trappola. This saves us the many miles of detour via Grosetto. We set up our tent on a beautiful terraced campsite in Talamone, a touristy town worth a lot of overpriced touristy restaurants. 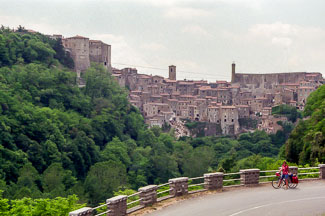 After Talamone we decide to take a walk on the mountainous peninsula of Monte Argentario, known because of Porto Ercole, where the Dutch Royal Family once owned a house. On the endless beach of de Tómbolo di Giannella we rest for a while. After this moment of calmness we continue our travels on the mainland. This means we are confronted with several difficult climbs on curvy roads, but the panoramic views of the little villages and towns in the area makes the climbing a little more bearable. Via the villages of Manciano and Pitigliano we reach the crater rim of the volcanic lake of Bolsena. From a height of 595 meters we enjoy the beautiful views over the almost perfectly circular lake. The lake is located almost 300 meters lower and during our descent our brake shoes suffer a lot.
There are almost 20 campsites around the lake, but despite this it is relatively calm. The water of Lago di Bolsena is said to be very clean and excellent for swimming (in contrast to the Lago di Trasimeno, 60km up north from here).

After Bolsena we ride north towards Monte Amiata, which is the highest mountain of Tuscany with its 1738 meters. We bike along calm roads on the wooded flanks of the hills between old towns without any notable attractions but with a tranquil atmosphere. Tourism is supposed to give new life to this depleted area. When we approach the famous town of Siena the scenery changes. We are in the crete now, a sparsely populated landscape of rather low, barren grey hills, high rising cypresses and lonely farms.
The 97 meter high Torre del Mangia, right in the city centre of Siena is visible from quite a distance. Siena is definitely worth a detour. Here you will find the most beautiful square in Italy, the Piazza del Campo, where the Palio is held twice a year. The Palio is a famous horse racing contest between the contrade, the medieval districts of Siena. During the day there are lots of tourists in the city centre, but it doesn’t feel like an overexploited open air museum like San Gimignano. During the night the streets are surprisingly quiet and it is very enjoyable to make an evening stroll in the almost car free area around the Piazza del Campo. Don’t forget to climb the Torre del Mangia for a beautiful view over the Piazza del Campo, the city and the surrounding farm land and vineyards. 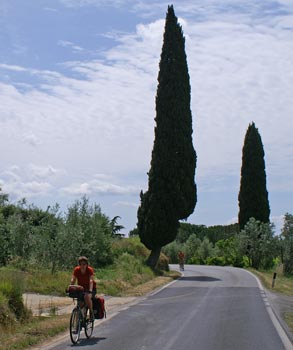 The landscape north of Siena is much greener than south of the city. We are in Chianti now, where picturesque vineyards and villages substitute each other. This is the region where a lot of wealthy foreigners have bought second homes, which has not only driven up the house prices, but also the rates of hotels and restaurants. 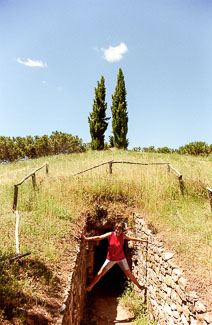 We try to find some calm roads, because even in the early summer it is very busy here with tourists driving around in their cars and motor homes. The landscape is still exceptional, but the tourist influx from the north has claimed his toll. Towns like Greve, Radda and Castellina are just as busy as a Disney Land theme park, full of Western and Northern Europeans who buy wine and olive oil in fancy shops.
Near Castellina we check out an Etruscan necropolis from the 6th century B.C., the Tumolo di Montecalvario, consisting of of four graves. Turning and twisting between roads and hills we head for Florence where we set up our camp on campsite Michelangelo. 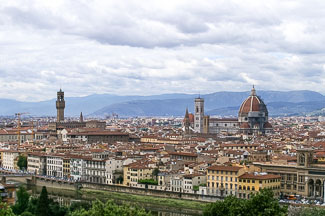 The view from the Piazzale Michelangelo, next to the campsite, is world famous. It is supposed to be one of the most beautiful city views of the world. You can admire the Ponte Vecchio, the Uffizi Museum, the Palazzo Vecchio with its famous tower and the Duomo against the background of the Tuscan hills and the village of Fiesole. If you walk down to the river Arno from the Piazzale Michelangelo you can walk alongside the bank to the Ponte Vecchio, a beautiful covered bridge in earth colors, built in 1345. There are many shops on the bridge that sell jewelry. 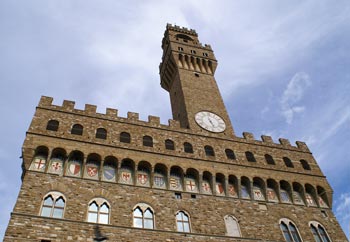 After crossing the Arno you will reach a crowded tourist ghetto where the traffic squeezes itself through the narrow streets. For the real beauty of Florence you have to look inside, in the numerous churches and museums such as the Uffizi, with masterpieces of Fillipo Lippi, Leonardo Da Vinci and Botticelli. The Bargello, with sculptures made by Michelanglo and Donatello. And of course the Palazzo Pitti. This museum harbors the Bóboli-gardens (Giardino di Bóboli) the only green oasis in the city, excellent for picknicking!

After Florence we travel back to San Gimignano via Poggibonsi, where we pick up the car and drive to Lucca, one of the pearls of Tuscany. Because Lucca is situated just outside the typical tourist routes, the city – just like Bologna – is relatively unaffected by tourism. You should visit the beautiful Piazza Anfiteatro, a square with medieval buildings that still contains tracks of the Roman amphitheater that used to be here.

Only 20 km south west of Lucca is Pisa, a city that is worth a detour only because of its famous tower, The Torre Pendente, which is also the name of the city campsite. Experts say that the tower will not collapse for at least another 3 centuries, so a climb to the top of the tower is not too risky. The Tower of Pisa is situated on the Campo dei Miracoli, with the tower, the Cathedral (Duomo) the baptistery and the Camposanto, the cemetery that resembles a cloister. All the structures are made with Carrara-marble, which makes the structures form a beautiful unity.
Apart from the Campo dei Miracoli there are surprisingly few tourists in Pisa. It is certainly worth traveling to other parts of the city, only because the restaurants offer a significant price/quality ratio, in comparison to the restaurants close to the tower of Pisa.