Vienna: From Schönbrunn Palace to St. Stephen's Cathedral and from Sachertorte to Wiener Schnitzel 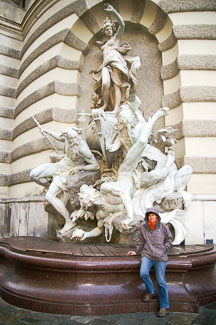 The Austrian capital of Vienna has a bit of a dull and old-fashioned reputation, but this is completely unjustified. Of course, the city is full of pompous baroque buildings from the Habsburg past, and the references to Empress Sisi, Johann Straus and Franz Lehar are omnipresent. But you will also find wonderfully modern museums, bold architecture and enjoy a delicious dinner at restaurants where the Wiener Schnitzel has been removed from the menu and the newest culinary trends are embraced. Vienna has found a new élan over the past few years, and a weekend city trip is hardly enough to get acquainted with this city along the Danube River. 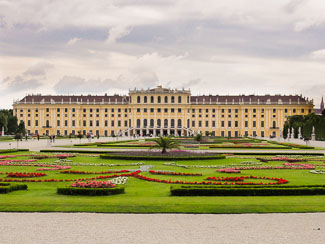 Vienna greatly owes its monumental appearance to the Habsburg Emperors who showed off their wealth by building enormous palaces and furnishing them with art treasures from across the world, such as the Hofburg in the centre of Vienna. A part of the tragic lives of emperor Franz Josef I and the depressed and neurotic empress Elisabeth of Bavaria (better known as Sisi or Sissi, immortalized in the famous trilogy with Romy Schneider) took place here. For example, the sporting equipment of empress Sissi can still be seen at the Hofburg Palace. After the First World War the Habsburg empire was done for. Another world war ended the prosperity of Austria and Vienna. Vienna was completely impoverished after two world wars. It wasn’t until the 1950’s that Vienna started scrambling to its feet to adapt a new and more modern image. 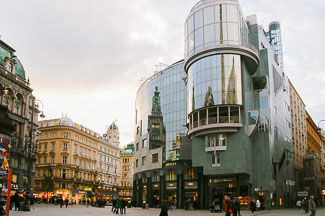 The contrast between the old and new Vienna is visualized beautifully at the Stephansplatz (St. Stephen's Square), where the medieval gothic St. Stephen's Cathedral with its 250,000 colored tiles reflects against the Haas Haus, a building from 1990, designed by architect Hans Hollein. The restaurant in the Haas Haus has excellent views of St. Stephen's Cathedral. The church was heavily damaged during World War II but has been completely renovated. It serves as a symbol of the rebuilding of Austria. 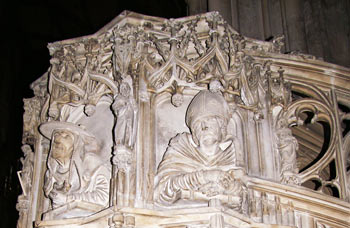 Do not forget to visit St. Stephen's Cathedral, if only to take a look at the pulpit of Anton Pilgram which was built in 1510. It is exquisitely crafted and the railings are decorated with toads and lizards, as symbols of evil. 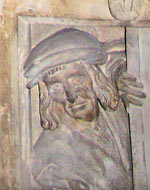 The artist Pilgram has depicted himself under the pulpit watching his own work from an open window. (“ Der Fenstergucker”) It is also worth climbing the stairs to the first floor above the west façade, where exhibitions are often held. It gives you a beautiful view of the city and the magnificent tile floor of the church nave. 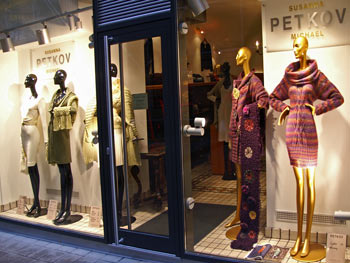 Around the Stephansplatz there are several streets with a wide variety of shops, from international chain stores to exclusive fashion boutiques. Especially in the Graben and Kolhmarkt, leading to the Hofburg Palace, the exclusive fashion and jewelry catch many an eye. Café Demel is one of the most famous Viennese coffee houses and was frequented by empress Sissi. The interior is really beautiful and just because of this it is worth ordering an Einspanner (Coffee with whipped cream) or Grosser Schwarzer with Sachertorte or a Dobostorte (never ever just order an “kaffee”, but order according to the items on the menu). Halfway the Graben is the Pestsäule, a monument that Emperor Leopold II had built in 1679 after a plague epidemic took the life of more than 100,000 citizens. 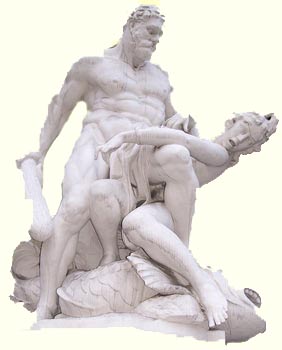 Culture lovers can eat their heart out in Vienna. In the Hofburg Palace there are the imperial chambers of Franz Joseph and his wife Elizabeth; six rooms are completely dedicated to the unhappy Empress Sissi. Baroque lovers shouldn't miss the enormous Belvedere with the French gardens from the beginning of the eighteenth century. It is here where the independence of Austria was sealed in 1955. Not to be missed is the Schloss Schönbrunn, the former summer residence of the Habsburg dynasty. The interior is a pinnacle of the rococo style; in the beautiful Hall of Mirrors Mozart once performed for Empress Maria Theresa. The room is now used for daily concerts in Mozart style for tourists.

The Museum of Art History (Kunsthistorisches Museum) is a highlight of the city, not only because of its impressive architecture, but also because of the art collection, brought together by the Habsburg family, which is regarded as one of the most important of the world. It features paintings of Rubens, Rembrandt, Titian and Pieter Brueghel the Elder (one third of all his works, including a farmers wedding). Also the subtly illuminated Roman and Egyptian departments are worth a visit.

Across the Museum of Art History is the Natural History Museum (Naturhistorisches Museum), with a collection of more than 20 million objects. A selection of all the stuffed up animals, geological and archeological items is still displayed out in old fashioned glass cases, giving the museum a special atmosphere. One of the top pieces is the Venus of Willendorf, a 25,000 year old female figurine. Not far from the Museum of Art History is the MuseumsQuartier, once the horse stables for the emperor. From 1990 onwards the stables were changed into a big cultural complex. A highlight is the the Leopold Museum with works of Gustav Klimt and Oskar Koloschka. In and around the complex there are quite a few restaurants and cafés. 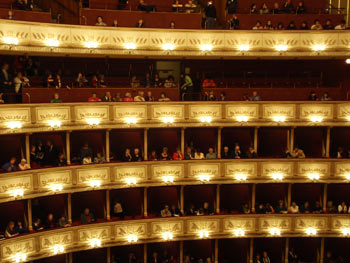 A night out to the Staatsoper(State Opera), the Volksoper or the Musikverein (known for its New Year concert) is a veritable experience, especially because of the beautiful entourage and festive atmosphere. Vienna is still an important centre of classical music, with a critical audience that is not afraid to hear its voice. The tickets aren’t cheap and in the Staatsoper there are a number of seats with a restricted view, so beware (take a look at the map on the website before you buy a ticket) but often there are pitch places for a couple of euros. Keep in mind that you will look funny in the Staatsoper if you are wearing jeans and a jumper. 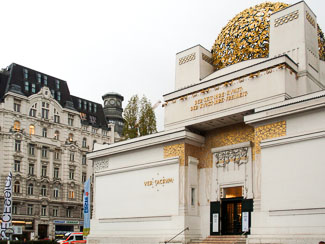 Vienna is an important centre of the art nouveau (Jugendstil) that was shaped here in the Secession-movement, founded by Gustav Klimt in 1897. Pivotal to the movement are bright colors, flowing human forms and styled plant motives. A well known example of the secession architecture is the Secession Building in the Friedrichstrasse. The white building is characterized by simple geometrical forms and is crowned by a striking dome of 3000 plated laurel leaves. Notable is the fact that the building was in poor condition for years and its importance wasn’t recognized until the 1970's. Now it is fully restored. Inside of the building the Beethoven fresco by Gustav Klimt draws a lot of visitors. 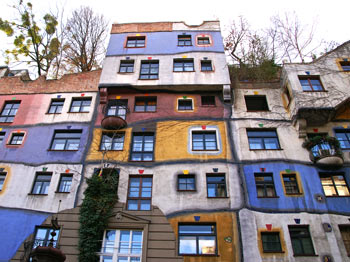 Just as famous as the Secession building is the Hundertwasser House (Hundertwasserhaus), a colorful complex built in the 1980’s by Friedrensreich Hundertwasser. Try to visit this building on a sunny day so that you can admire the beautiful concrete walls in their full glory, and try to ignore the hordes of tourists that flood this attraction from early in the morning. The apartments in the house are occupied by tenants and cannot be visited. Facing the house is a big souvenir shop and a café in Hundertwasser style. 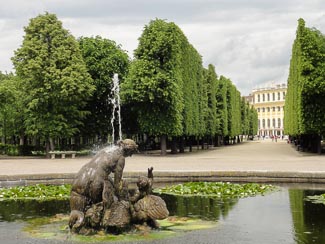 Schönbrunn Palace is one of the main attractions of Austria and definitely worth a visit. In and around the Rococo summer residence of the Habsburg Emperors one can easily spend a whole day. The giant complex functioned as the set for the famous Sissi trilogy with Romy Schneider the 1950s and there are more than 1400 rooms. A small number can be visited, including the Mirror Room, where the six year old Mozart once performed for the Empress. Every year around 2.5 million people visit Schönbrun Palace, and the crowds can be intimidating, despite the vastness of the grounds. Don't forget to take a look in the park. The visit is free, but the maze and the Gloriette viewing terrace are closed in wintertime and cost a view euros. The folly of the Roman Ruin is a beautiful example of 18th century landscaping.

Real Sissi fans should buy a discounted Sisi Ticket. For € 23,50 it entitles to a visit of Schönbrunn (Grand Tour), the Hofburg and the Hofmobiliendepot.