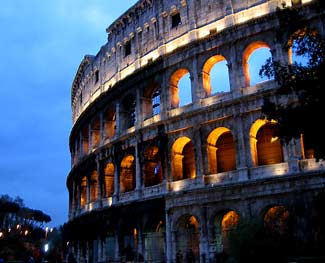 Rome, from the Forum Romanum to Ostia Antica

Although Dutch Travels visited the Italian capital Rome many times, it always proves difficult to say goodbye to The Holy City. There aren't many cities in the world where there's so much to be seen in such a compact area. And with all the low cost airlines nowadays it's certainly not expensive to fly to Rome for a rewarding weekend trip.

Rome is packed with monuments, but you will also find village-like alleys with intimate  trattorie, marvellous panorama's, spacious parks with Mediterranean flora and interesting surroundings in the Lazio countryside just outside the city. And furthermore there's the delightful climate in spring and autumn, the luxury shops with Italian design goods, the excellent cuisine, from pizza to ossobucco, and maybe the biggest attraction of all: the Romans themselves...

The Colosseum and the Forum Romanum are of course well known as silent witnesses of the glorious past of the Roman Empire. but there's more, from vast complexes like the Thermae of Caracalla to a toppled column with a crumbling wall on a street corner. Admittance to the Forum Romanum is free nowadays, and it's always nice to stroll around between the ruins, although it can be very busy with tour groups. Mass tourism has taken its toll: the courtyard of the Vestal Virgins is fenced off and you really have to strech your neck to catch a glimpse of the famous statues. There's a beautiful view of the Forum from the Palazzo dei Conservatori, which belongs to the Capitoline Museums.

A visit to the Capitoline Museums is very rewarding, especially after the recent renovations. It is the oldest public museum in the world and enjoys great fame thanks to the collection of antique statues, including many busts of Roman emperors, the bronze statue of Marcus Aurelius on a horseback and the spinario, a strikingly realistic statue of a boy who removes a thorn from his foot. 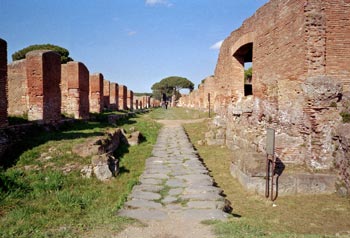 A day trip to the excavated city of Pompeii is just too far from Rome (you really need a whole day in Pompeii), but Ostia Antica is a good alternative if you want to see an antique Roman city, although the ruins and paintings aren't quite so spectacular as Pompeii or Herculaneum. Ostia can be reached by underground and city train within half an hour. It's amazing how many buildings still stand upright; there are even some apartment buildings of three or more floors.

Ostia was the port of the antique city of Rome, but nowadays it is several kilometres inland. The city slowly lost its significance when the harbour got silted up, and a malaria epidemic in the 4th century marked the definitive end of the city. In Ostia Antica it's usually very quiet, contrary to Pompeii where hordes of tourists make it difficult to enter the sights. The train to Ostia Antica contiues to the coast, but the seaside resort of Ostia is very ugly and the beach isn't much better. 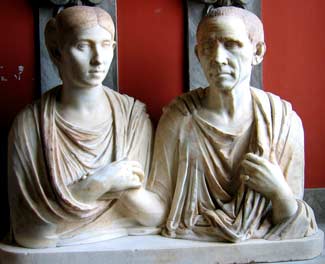 A visit to the Vatican Museums is a unique experience, not only because of all the assembled art treasures, but also because of the sheer number of visitors that is driven through the rooms every day. The queue of tourists along the Vatican walls can be depressingly long. There are a few remedies: visit Rome in the low season or plan your visit at the end of the morning. Another tactic is to queue as early as possible and to head directly for the Sistine Chapel once you are in the museum, a 20-30 minute walk. There's a good chance you can admire the unique Michelangelo frescos in relative stillness. It will be an entirely different experience, compared to being in the chapel with literally hundreds of other visitors, many of them whispering, talking aloud or taking pictures, a pandemonium regularly interrupted by attendants yelling 'Silenzio!' and 'No pictures!'. If you can't stand the buzz and the crowds anymore, head for the Etruscan Museum, which is very rewarding and usually very quiet. 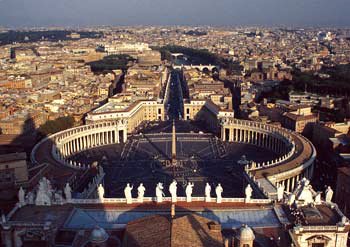 From the dome of St Peter's Basilica there are fantastic views of Rome and St Peter's Square with the Via della Conciliazione behind it, the grand boulevard constructed to connect Rome and the Vatican after the signing of the Lateran Treaty between Mussollini and Pope Pius X in 1929.
Tip: A visit to the excacations under St Peter's Basilica, the supposed location of St Peter's grave, is a worthwile experience. Tickets are in high demand and should be ordered months ahead at the excavations office. 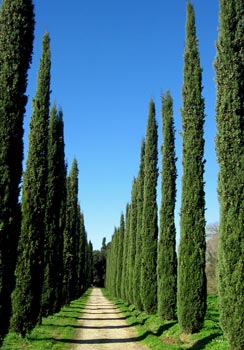 It's very easy to escape the busy city and visit the surrounding countryside. Just take the train from Termini station to Frascati, a village surrounded by vineyards in the Colli Albani. The journey takes only half an hour. From Frascati you can walk in an our or so to Tuscolo, Roman excavations high on a hill where Cicero once had a villa. There are beautiful views over the surrounding hills. When you're back in Frascati, you can enjoy the refreshing white Frascati, the wine that is consumed in Rome since ancient times. Order a carafe right from the barrel with a plate of antipasti, like peperoni in olive oil, dry sausage or artichoke hearts in one of the many wine cellars before heading back to Rome. 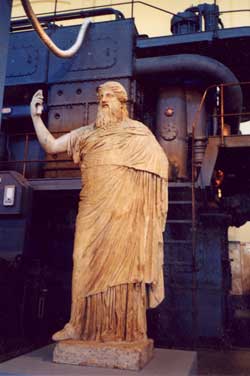 A must for lovers of antique sculpture and industrial archaeology is the Centrale Montemartini, a building in a rather uninteresting suburb of Rome. Once it was the first electricity plant of Rome (1912), which was closed in 1963. Since 1997 a number of statues from the collection of the Capitoline Museums are on display here. The antique sculptures harmonize in a strange way in the big museum hall, where two giant diesel engines and a steam turbine are the showpieces. The other rooms present an overview of the development of the city of Rome through the ages. Combination tickets with the Capitoline Museums are available. 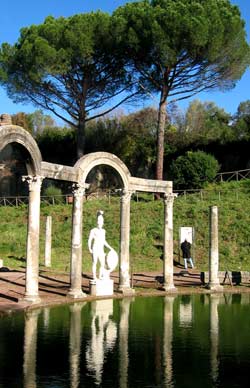 A few kilometres outside Tivoli, a small town in the foothills of the Alban Mountains (Colli Albani), there's the Villa Hadriana, an extensive palace complex built in the 2nd century AD by the emperor Hadrian as a residence for himself and his court. It's very relaxing to wander around the partly well preserved buildings, the original function of which isn't always clear. The gardens around the buildings are well suited for a picnic in the shadow of the pine trees. The villa can be reached by bus from Rome in about an hour; ask the driver for the stop for "Villa Adriana". It's a walk of about 1 km from the bus stop.
A visit to the Villa Hadriana can easily be combined with a visit to Tivoli's other big attraction, the Villa d'Este, amazing renaissance gardens with fountains everywhere right in the city centre. The gardens are about 4 km from the Villa Hadriana (walk back to the main road and take any bus for the last few kilometres to Tivoli). 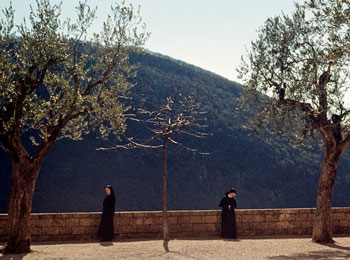 The small town of Subiaco, around 30 km east of Tivoli, is surrounded by high mountains where skiing is popular in wintertime. On a slope just outside the town is the monastery of St Benedict, where the founder of the monastic life lived in the Sacro Speco (holy cavern) for three years. In the monastery complex beautiful fresco's, some from the 8th century, have been preserved. There are several nice walking trails around the monastery, far away from the bustle and noise of Rome. Subiaco can be reached by COTRAL-bus from Rome (Ponte Mammolo, metro Linea B) in about 1 hour 15 min. (schedule). 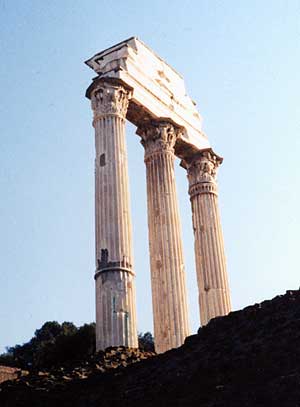 Underground and bus services are relatively cheap in Rome. The two metro lines aren't very practical, except for a visit to the Colosseum, Ostia Antica or the church of San Paolo fuori le Mura, so you will probably use the buses a lot, although many attractions in the city centre can be visited on foot just as easily.

Hotels in Rome aren't cheap and rooms usually are small. You should book a hotel well ahead, because accommodation fills up quickly throughout the year, and a hunt for a room with all your luggage in the city centre is no fun at all. 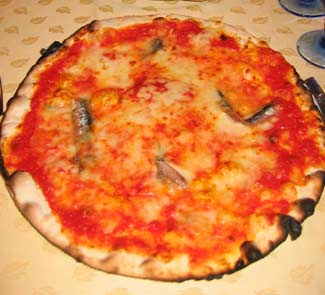 The choice of restaurants in Rome is bewildering, from simple pizzeria's to luxurious establishments. Outdoor cafes are very expensive, especially in touristy areas, but drinking an espresso or cappuccino standing at the bar, like the Romans do, is rather cheap. A piece of pizza from the baking tray (pizza al taglio) makes an excellent lunch, or you can order a filled sandwich in any grocery (alimentari).
It's difficult to find a supermarket or grocery in the city centre; one of the few is in the basement of Stazione Termini.
In many restaurants you can order a carafe of cashed whine (vino sfuzo), usually white whine from the Alban Hills, which is considerably cheaper than a bottle and also of less quality, but thirst-quenching anyway. Italians strongly believe a meal can't be enjoyed without water (acqua minerale), carbonated (gassata) or still (naturale). Pizza is usually accompanied by draught beer and oddly also increasingly by big bottles of Coca Cola.

The Rough Guide to Rome is a good travel guide, with lots of tips for accommodation, restaurants and bars.