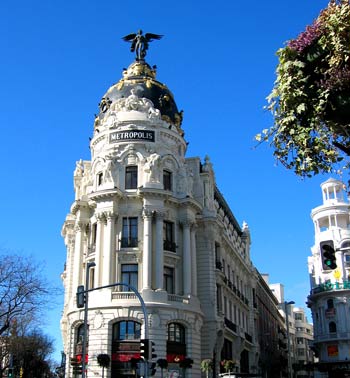 Madrid: from the Plaza Mayor to the Prado Museum and the Parque del Buen Retiro

The Spanish capital Madrid is an ideal destination for a weekend break. The city prides itself on having the most bars and restaurants per capita in the world, on world famous art treasures in the museums and countless lively squares and parks. Although you won't find many historical monuments in this modern metropolis, there is so much to see and to do that nobody will have time to get bored. The excellent metro service is ideal for short or longer trips around the city, so it's quite easy to get a good impression of this increasingly popular tourist destination in a day or three.

Madrid is situated on a plateau at 600 m above sea level and doesn't profit from the mild Mediterranean climate as other Spanish cities like Barcelona and Valencia; in wintertime the city is plagued by icy cold winds from the surrounding mountains and summers can be scorchingly hot.nueve meses de invierno y tres de infierno – nine months of winter, three months of hell, as the Madrileños say. Even so, in winter and spring there are many sunny days with clear blue skies, inviting to take a walk along the many boulevards and squares. On Sundays you surely won't be the only one, as this is a popular weekend activity in the Spanish capital. For a real authentic experience, start the day at a sidewalk café with the Sunday newspapers and a café con leche; around noon, visit one of the countless bars and order a vermouth. Around this time, many bars are already packed with families. 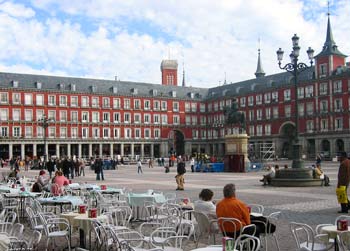 The grand Plaza Mayor is Madrid's central square. Once it was a bullfight arena and heretics were burned here under the watching eyes of the royal family, but nowadays only the pavement artists distract from the views of the surrounding buildings. Take your time at a sidewalk café to enjoy the fresco's on the façade of the Casa de la Panaderia; the waiters can be somewhat surly here, but that's no exception in Spain. On the other hand, the service is mostly swift and professional. 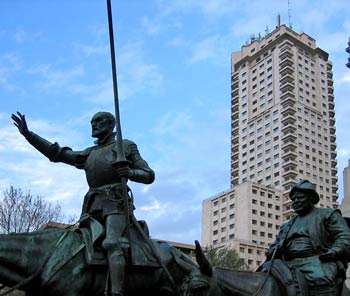 Plaza de España and Gran Via

Madrid has its share of ugly architecture. The most famous example is the Plaza de España, dominated by two skyscrapers from the Franco era which seem to be brought in from Moscow. Much more appealing is the bronze sculpture group of Don Quijote and his pal Sancho Panza under a statue of their creator Cervantes. It's nice to sit here for a while under the olive trees. If you fancy a walk, it's worth the effort to explore the Gran Via with the surrounding imposing buildings. The best of the lot are the striking Telefónica building, once the highest building of the city, and the Edificio Metrópolis (pictured at the top of the page), dating from 1905, topped by a winged Nikè (added in 1975).
Other well known squares are the Plaza de la Puerta del Sol, the geographical centre of Spain, and the cosy, lively Plaza de Santa Ana in the Huertas district, the nightlife epicentre of Madrid. There is a myriad of bars and restaurants in the streets around this square, but still it can be difficult to find a seat. Around lunch time many establishments are jam-packed (in fact the whole afternoon on Sundays) and if the weather is fine, you won't find a free table at the sidewalk cafés easily. 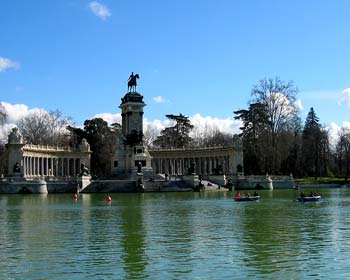 Madrid is blessed with a vast green lung in the city centre. The Parque del Buen Retiro is a popular space for jogging, walking and rowing on the lake in the centre of the park. Especially on Sundays the crowds are immense. Don't forget to visit El Bosque de los Ausentos, a monument to the victims of the terror attack of 11 March 2004 (11-M), in the south eastern corner of the park. An olive tree or cypress has been planted for each of the 191 deaths, and there's an information centre about the attack that's open in weekends only. 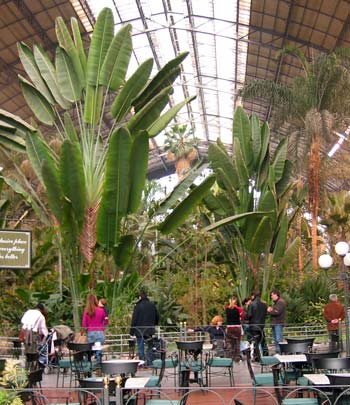 South of the park is the huge Atocha train station. The original cast iron station hall, dating from the 19th century, has been preserved between the modern extensions and has been converted into a tropical greenhouse with palm trees that almost reach the glass roof. Around 500 plant species have been collected here. This humid green oasis is surrounded by restaurants, bars and information centres of the Renfe, the Spanish railway company.
Other interesting plant species can be found in the Botanical Garden (Real Jardín Botánico), opposite the south entrance of the Prado, with fine examples of the flora of the Spanish peninsula and the Canary Islands. This park is perfectly suited for a nice walk or a picnic on one of the benches (entrance € 2). 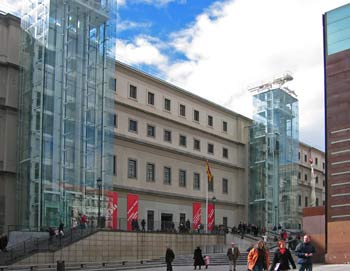 There may be few historical monuments in Madrid, but the awesome art collections compensate for that absence. Three museums are not to be missed: the Prado, Reina Sofía and Thyssen. During a weekend trip to Madrid, you'll have tot choose, because the danger of an art overdose is real. Many people will choose the Museo del Prado, one of the most famous painting collections in the world. Here you'll find works of illustrious painters like Velazquez, Goya, El Greco and last but not least Hieronymus Bosch, whose amazing The Garden of Earthly Delights shouldn't be missed. A tip if you're on a budget: on Sundays the entrance to the museum is free, but be prepared to wait in line for an hour or more. Many people will prefer to pay € 6 for a quieter experience on other days. 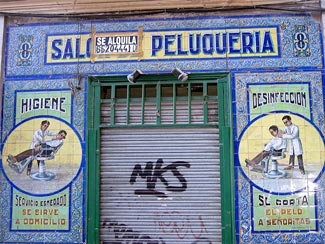 Besides to the Prado there are two other museums in Madrid that no art lover should miss: the Centro de Arte Reina Sofía, where Picasso's Guernica and works of Miró and Dalí are the main attractions, and the Museo Thyssen-Bornemisza, one of the biggest private collections in the world. This unique collection of baron Hans Heinrich Thyssen-Bornemisza, a German-Hungarian magnate, consists of paintings from the Middle Ages to the present day, with works of Piero della Francesca and Holbein, Dutch and Flemish masters (Brueghel, Rembrandt) and more modern works by Cézanne, Matisse, Edward Hopper and Roy Lichtenstein. 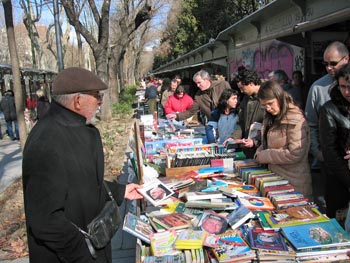 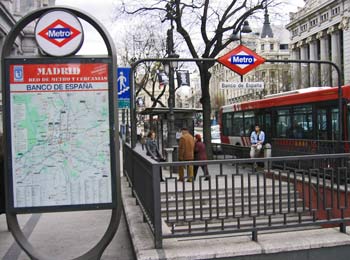 The airport of Barajas is connected to the underground network of Madrid (station Aeropuerto), with frequent services and trains until 2 'o clock in the morning. A single trip costs € 1,50 to € 2, depending on the distance, but if you plan to stay a few days, it's generally cheaper to buy a booklet of ten tickets at the ticket machine (€ 12); these tickets are also valid in city buses. There are also tourist tickets (Abono Turistico), giving access to public transport for one or more days, that can be cheaper if you plan to use the underground and the buses frequently. A ticket for three days costs around € 18,40 and just € 35,40 for all the public transport in Madrid and surroundings (e.g. Toledo and El Escorial).
A plan of the underground network in PDF-format can be found on the underground website.

There's a good choice of hotels in Madrid in all price categories. Prices have gone up sharply recently and are now on a Western European level. The cheapest hotels and pensions are often located on the highest levels in apartment buildings and usually have no more than a few rooms. It can prove very difficult to make reservations at these accommodations. Just ring and try your luck. If you fancy a good night's sleep, pay attention to the locations of the hotel, as I can be very noisy in the entertainment districts until the early morning. 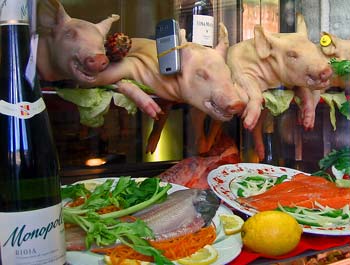 There are so many bars and restaurants in Madrid that it can be difficult to make a choice. If you're looking for a traditional Spanish tapas bar, an Irish pub, a Cuban café or a trendy fusion restaurant, you'll find them all in central neighbourhoods like Chueca, La Latina and Huertas. If you really want to eat in a particular restaurant, it's certainly recommended to make reservations. An alternative to an evening meal or lunch is to order some raciones (pictured below) or medio (half) raciones, for example garlic shrimps, jamon Serrano or preserved red peppers. With some bread and wine it's an excellent meal! 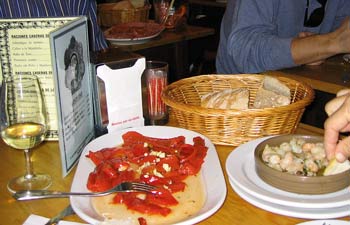 There are some typically Spanish peculiarities to take into consideration in bars and restaurants: It's not necessary to say 'muchas gracias' to the waiter when your café con leche is served; there's a change you'll only get an annoyed look. Also the meal times are rather peculiar for inhabitants of Western and Northern Europe: the Spaniards tend to take lunch around two o'clock and many restaurants are deserted or closed before 8.30 in the evening; before 9.30 pm most customers are tourists.
The price level in bars and restaurants is about the same as in Western Europe, but a glass of wine or beer is generally less expensive.

The Lonely Planet city guide Madrid has excellent tips and a lot of inside information.