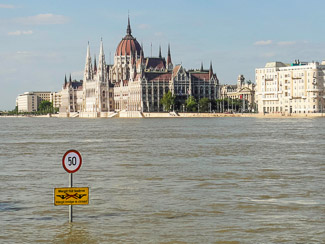 Budapest: Impressive monuments and relaxing spas alongside the Danube

Big cities in the former Eastern bloc countries have a longstanding reputation as dirty, gray metropolises with neglected monuments and a lack of green areas. However, since the fall of the Berlin Wall a lot has changed. The Hungarian Capital of Budapest is one of the cities that has gone through a real metamorphosis and where the cultural heritage — with many Jugendstil monuments — has been restored extensively. Concrete apartment complexes have been substituted by green spaces and facilities for tourists have been brought up to par, and Budapest can now present itself justly as the Spa Capital of Europe. We visited this lively city in a cold November week.

After a quick check-in in the Danubius Hotel Budapest we take the tram to the river Danube area. It's only around 4 pm,, but it's already rather dusky — sunset comes early here, as Budapest is still in the same time zone as Western Europe. From the illuminated Chain Bridge we have a beautiful view of the mighty river (300 m wide) that divides the city: The hilly, green Buda in the west and the metropolitan Pest in the east. We continue our walk to watch the famous Parliament Building alongside the Danube, built in neogothic style at the end of the 19th century. Tours of the the Parliament Buidling are free for EU citizens, but sadly we don’t have enough time to do this. 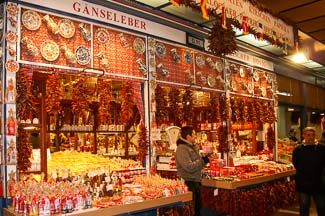 Thinking of Hungary, peppers spring to mind. And indeed, when we visit the market halls we see lots and lots of dried peppers and pepper powder in the stalls. You can also find foie gras (goose liver), salami and other specialties such as the herb liquor Unikum. The color red dominates in the packed stalls. The market is located in a beautifully restored Jugendstil building from 1897 that resembles a train station and where you can easily spend an hour or so. 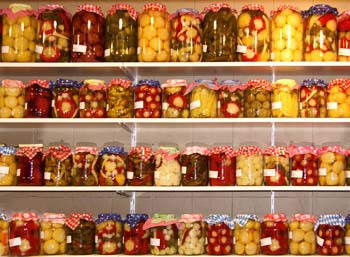 Apart from the stalls full of souvenirs, specifically aimed aimed at tourists, there are also plenty of stalls in the basement with daily provisions such as meat, fish, fruit and vegetables. This is where the local population does their shopping, and this is why the market is also called the 'Belly of Budapest. Around the market are several shopping streets such as the Váci utca and the Andrássy út, proving that socialism has been traded in for capitalism. World famous brands such as Gucci, Armani and Dior have settled down here. 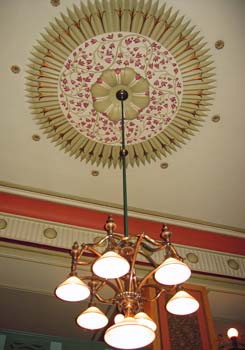 We take a break in one of the traditional coffee houses Budapest &mndash; just like Vienna — can rightfully boast upon. Sucha a kávéhaz is an excellent place for a cup of coffee and delicious pastries. The coffee houses often have a Jugendstil interior with plenty of historical details. In the 19th century coffee had turned into such a popular beverage that there were no less than 500 coffee houses in Budapest, where artists, writers and philosophers enjoyed lively debates. After the communist era there were only 10 of these houses left. Luckily there are some more now, such as the Café Central. The most famous coffee house with delicious coffee and excellent pastry is Gerbeaud, a marvelously decorated place with chandeliers and marble tables. It is mostly visited by tourists and is overpriced, but nevertheless worth a visit. 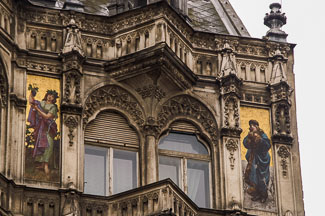 Not only the coffee houses can boast upon Jugendstil elements — around the city there's Jugendstil (or Art Nouveau) everywhere. Together with Brussels, Vienna and Barcelona, Budapest is considered to be the centre of this art movement from around the turn of the 20th century. In Hungary this art style is seen as the national style, with architect ödön Lechner as leader. His most important works are the Geological Institute, that has a blue ceramic ceiling, and the Postal Savings Bank (Postatakarékpénztár) from 1901. Other well known Jugendstil buildings are the Franz Liszt Music Academy and the Gellért-baths. 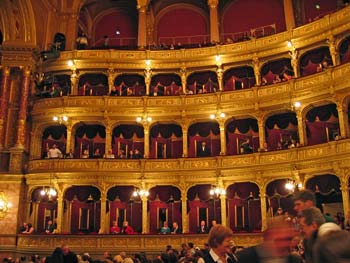 Aficionados of the Central-European nostalgia will be served well in Budapest — apart from the coffee houses there are other cultural temples such as the Opera and the Franz Liszt Music Academy that have a very classical appearance. The Opera is considered to be one of the most beautiful opera buildings in the world. And when we enjoy Othello of Verdi in one of the loges in the opera we truly feel like being in a different era for a couple of hours. It is also worth to check out the foyer and other rooms, which is possible during one of the breaks of the opera performances, which often last about 3 hours.
The tickets for the opera performances are easy to order through the Internet and are pretty cheap according to West-European standards, even for loge seats . 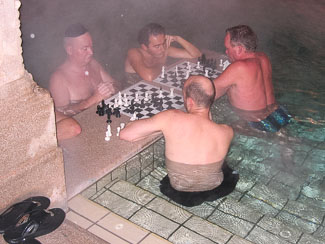 A visit to Budapest isn’t complete without a healthful plunge in one of the many thermal baths. Long before the terms wellness and spa were invented there was a lively bath culture in Budapest. The Romans first started building thermal baths, and the Turks revived the bath culture in the 16th century.
In and around the city there are 123 hot springs that supply the 40 or so bathing houses with tens of thousands of cubic metres of water a day. Many of the bath houses have quaint terms of use, with separated men and woman departments and a complicated locker system to store clothes and valuables. The staff often doesn’t speak English or German, which makes a visit all the mor complicated for unexperienced foreign visitors. All these drawbacks do not apply to the Széchenyi baths, and this makes them a very popular place for tourists. In the many baths and swimming pools in the huge complex you can easily enjoy a relaxed afternoon.

A Walk to the Elisabeth Tower

Budapest is surrounded by hills up to a height of around 500 meters that are often covered with snow in winter. And yes, it is snowing when we visit the Széchenyi Hill on a cold and cloudy Sunday morning. Many townspeople have travelled to the hills to go skiing. In the summer time there are lots of mountain bikers in this area, which is easily accessible with the cog railway that was built in 1874.The trains leave from Városmajor Station near the Moszkva tér square. Wandering from the end station through the woods and sliding in the snow we sometimes feel a little lost, but eventually we reach the Elisabeth Tower (Erzsébet Kilátó) at 529 meters. From the tower we enjoy the excellent views over the city and the surrounding rural area. Returning to the city we take the chair lift (Libegö)which leaves close by the tower. All together a nice trip tot take in some fresh air! 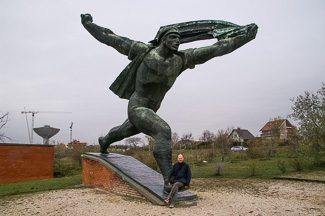 A long ride from Budapest is a statue park (Memento Park) where about forty huge sculptures from the socialistic era have been brought together. This park is definitely worth a visit if you’re interested in the heroic communist art expressions from the era of the Iron Curtain. If you are not interested in Lenin, Marx and other comrades in heroic poses you can better spend your time elsewhere. In the souvenir shop plenty of memorial gifts from the socialistic era, such as Lenin- T-shirts, are for sale. The park can be reached by special tourist bus, but also by public transport (cheaper but more time-consuming).