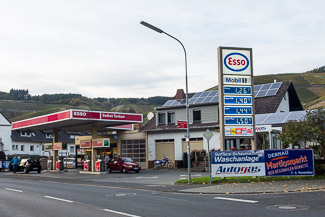 The prices of petrol, diesel and LPG differ considerably in European countries, mainly caused by the variations in excise duty. There are also big price differences depending on where you fill up. Along the highway you usually pay the highest prizes. In order to reduce the fuel bill, it is useful to know where in Europe you can find relatively cheap gas stations. On an average holiday this will save you a considerable amount, which you can spend on much nicer things than the filling the wallets of the oil companies and the government.

Along motorways fuel is usually (much) more expensive than on other roads. This is always the case in the Netherlands, Germany and France. Only a short distance away from toll roads and motorways there are often cheaper petrol stations, where you don’t have to wait in line at peak times and in the busy holiday season. For current fuel prices, look at the list of European fuel prizes Of the Belgian VAB or the Swiss automobile club TCS with the average prices for gasoline and diesel (pdf) in Europe. 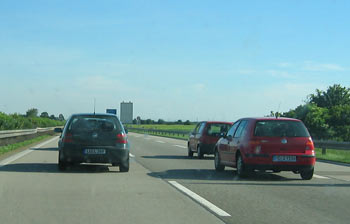 In France cheap gas stations can often be found near large supermarkets, the hypermarchés, usually signposted as centre commercial. Well known chains are LeClerc, Auchan and Carrefour. The gas stations at this French supermarkets are often unmanned outside the supermarket opening hours, at which time credit card payments (Visa or Mastercard) are the only option. In an emergency you can ask a friendly Frenchman to pay with his French card and pay him in cash.
LPG in France is fairly widely available, as shown in thisLPG summary by department; in order to fill up an LPG adapter is needed, which is sometimes available at the gas station, and otherwise at automobile associations (ANWB, ADAC, AA).

At many gas stations in France you can fill up you tank with E10 Euro 95 (SP95 E10) fuel, which is super-grade unleaded with 10 percent added ethanol. According to the German automobile association ADAC and its Dutch counterpart ANWB it is still unclear whether this is safe for all gasoline engines. It is therefore recommended to fill up with Euro 95 (SP95) without this E10 fuel, or otherwise Super Plus 98 if only Euro 95 E10 is available.

Leaving the Autobahn in Germany, you usually find at a gas station at a short distance with much cheaper fuel. There are also shorter waiting lines, especially in the busy holiday season. A PDF list of cheaper gas stations near the Autobahn is available at the website of the German motorist association ADAC. The ADAC also has a list of gas stations in Germany (Autogastankstellen).
At an Autohof, a large car park near the Autobahn with truck facilities, fuel is cheaper than along the Autobahn itself. Prices can easily be 10 cents lower for a liter of gasoline or diesel. An Autohof (list) is always signposted from the motorway and is at most a few hundred meters after the exit. You will lose virtually no time compared to gas stations along the autobahn.

LPG: The ADAC also has a list of LPG filling stations in Germany (Autogastankstellen).

At Clever Tanken You can enter a German zip code, which will result in an overview of the prices at the petrol stations in the area. Handy if you go to Germany on holiday.

Refueling in Luxemburg is still cheaper than in neighboring countries, although the difference is getting smaller. Currently gasoline is 20 to 25 percent cheaper than in the Netherlands, and diesel 15 to 20 percent.

If you want to avoid the very busy stations on the highway in Luxembourg (waiting times of three quarters are common in the holiday season!), take the exit ‘Luxembourg Centre’ on the E25 (no 4), follow this route (N6, route d'Arlon) a few hundred meters towards the city and you will find a cheap gas station (Lukoil). A little bit further there are Total, Esso and Shell stations. An alternative is to take the exit Bettembourg (no 2) on the E25 after the city of Luxemburg in the direction of France; at 2 km from the exit, there are two major stations, just before the town of Bettembourg (Aral, Route de Luxembourg 69, Bettembourg, and Q8, Route de Luxembourg 150, Bettembourg). At these stations, you can also buy cheap tobacco and liquor.

When travelling to Spain, it is good to know that petrol and diesel in Spain Is considerably cheaper than in France. The difference can be around 30 cents per liter. In the Canary Islands fuel is even very cheap (no taxes), so if you rent a car, you don’t have to worry about the fuel bill.

Until spring 2011 fuel prices in Switzerland were much lower than in the Netherlands, Italy and Germany, but since the massive appreciation of the Swiss franc (about 30%) in 2015 this is no longer the case. Both petrol and diesel (which has always been relatively expensive in Switzerland) are now more expensive than in neighboring countries. Given the turmoil in the currency markets this can of course change quickly again. Along the Swiss highways fuel prices are usually substantially higher than elsewhere (around € 0.10 per liter). In Switzerland you can pay in euros at virtually all gas stations, although the exchange rate will not be the best.

LPG In Switzerland, there are only a few stations where LPG is available, as shown in this LPG overview. Many gas stations are closed on Sundays.